Annual SOAW Vigil at the Border

Peace Action of Wisconsin again endorsed the annual School of the Americas Watch demonstration and vigil in mid-November. For the third year in a row, the event was held at the US-Mexican border in Nogales, Arizona and Nogales, Mexico. In previous years, the gathering was at the gates of Ft. Benning, Georgia, the home of the SOA.

Several of our members traveled to the border to stand in solidarity with our immigrant brothers and sisters and to bear witness to the role of the School of the Americas in training Central American soldiers and officers in the oppression of their own people. The military oppression, droughts, poverty and gang violence all contribute to the mass migrations of people fleeing their countries.

Chris Jeske, a new Peace Action Steering Committee member, took a group of ten Marquette University students to participate. The demonstrators had a first-hand experience of the looming separation wall and the increasing militarization of the border.

Local SOAW activists Barb Messerknecht and Connie Raether reflected on the weekend at the border:

Throughout the weekend of November 17th, we experienced many atrocities imposed on immigrants searching for new lives. We witnessed Operation Streamline in the Tucson District Court, where immigrants are sentenced to prison in “for profit prisons” and deportation. We participated in a march at the Milkor Corporation, an arms purveyor, to let them know we want to close them down, and we fanned out at the Eloy Detention Center raising our voices in song...”no estas solo, no estas sola” (you are not alone) while raising our flashlights and candles to light up the darkness and let those inside feel, hear and see our presence.

Saturday began with a march led by Veterans for Peace into Nogales Sonora. Throughout the day participants learned more about U.S. militarization of the border, criminalization of immigrants and policies that have led, and continue to lead, people to leave their homes in search of a better life. Later that day, many stood in silence at a prayer vigil at the wall while others joined in music.

The border encounter culminated on Sunday with a gathering at the wall, where those on both the U.S. and Mexican sides joined in a solemn litany to remember the thousands killed and disappeared while crossing the border. Everyone leaves the weekend with swirling emotions. Sadness, frustration, anger, and a strong resolve to go back to our homes and fight. “Juntos hacemos la liberacion”...we can and must work to change the system! 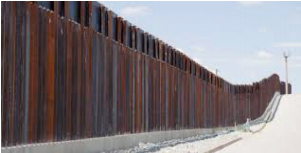 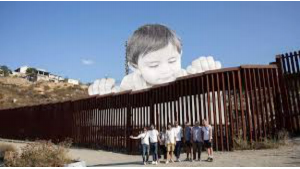 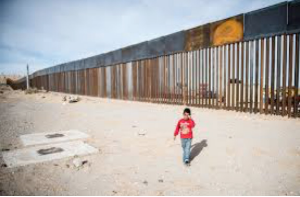 The US-Mexico border wall marches through the desert.