F-35 and the Military Industrial Complex in Madison WI

An article by the editor of Tone Magazine, an online magazine in Madison, concerning the F-35 and the military industrial complex.

The military-industrial complex in Madison

Those applying this foundational concept to the F-35s debate have a point. 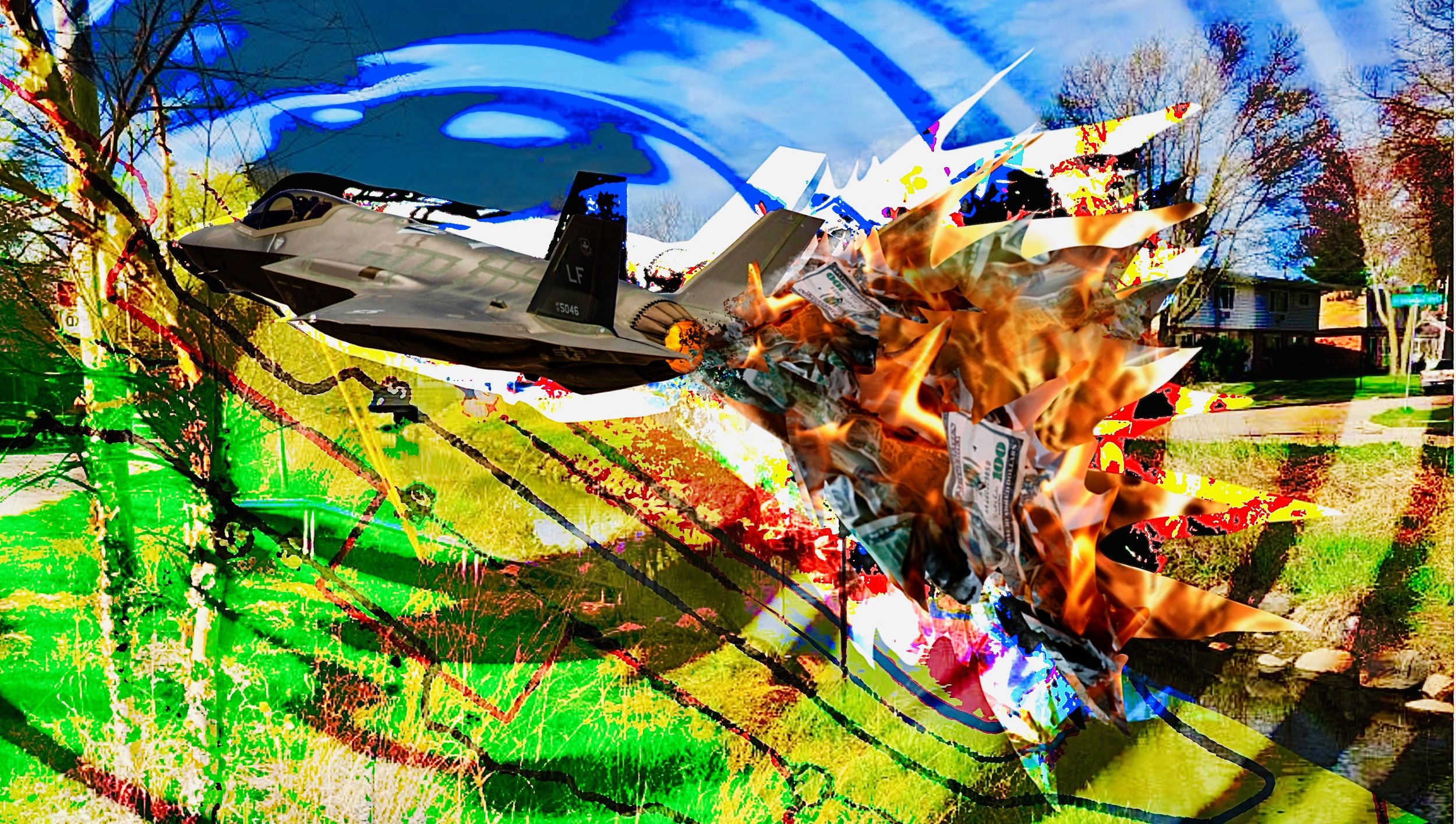 Illustration: Digital collage of an F-35 jet flying over Starkweather Creek. Money is burning in the jet fuel stream and waves of bright toxic green emanate from the F-35. Illustration by M.Rose Sweetnam. Those most deeply involved in activism on the issue have articulated a complex and intertwined set of reasons why basing the jets here would be a bad idea—especially its impact on water quality, housing, and childhood development. They use the phrase "military-industrial complex" often enough, but their analysis goes beyond shorthand. Their motivations are much more immediate than simply taking a moral posture against militarism in the abstract.

We do have to take Eisenhower with a truckload of salt here. He helped create one part of the complex that plays a significant role in Madison, after all. Military agencies provide tens of millions of dollars in funding to researchers at UW-Madison every year, an awkward fact of life that stems directly from Eisenhower signing the legislation that created the Defense Advanced Research Projects Agency. Eisenhower’s administration also oversaw the expansion of the surveillance state and covert military operations, from CIA-backed coups in Guatemala and Iran to the groundwork of the ultimately disastrous Bay of Pigs invasion in Cuba. Not to mention his role in American meddling in Southeast Asia, which would curdle into extensive covert and overt military action.

But you can see why the moral and practical force of Eisenhower's "cross of iron" speech still resonates:

This world in arms is not spending money alone.

It is spending the sweat of its laborers, the genius of its scientists, the hopes of its children.

The cost of one modern heavy bomber is this: a modern brick school in more than thirty cities.

It is: two electric power plants, each serving a town of sixty thousand population.

It is: some fifty miles of concrete highway.

We pay for a single fighter plane with a half million bushels of wheat.

We pay for a single destroyer with new homes that could have housed more than eight thousand people.

This—I repeat—is the best way of life to be found on the road the world has been taking.

This is not a way of life at all in any true sense. Under the cloud of threatening war, it is humanity hanging from a cross of iron.

Militarism, education, healthcare, food, housing, civilian infrastructure, all bound up in one massive and delicate balance. It suggests a sort of "it's all connected!" thinking that has long been unfashionable in our political culture. Still, as we debate fighter jets past and present, we are seeing the trade-offs play out in real time. The over-investment in weapons does leave other needs unmet, and causes plenty of new problems. The Madison area's schools and healthcare systems are struggling under the pressure of a COVID-19 pandemic, we don't have a solid game plan for affordable housing, and we have thousands of neighbors who, as Ike put it, "hunger and are not fed, those who are cold and are not clothed." When the "military-industrial complex" framing comes up in pro-jet arguments, it becomes not just an object of ridicule but an oversimplified straw man. A recent cartoon in the Wisconsin State Journal sets up a scenario where the anti-F-35 crowd is putting people out on the street and standing in the way of new housing development just to make a point, willing to let others suffer if it gives them a hit of smug moral superiority. Cartoonist Phil Hands (he of cursed dick) doesn't actually use the phrase in the cartoon, but writes in the accompanying text that "Madison leaders would rather play politics with the 'military industrial complex' and F-35s than deal with Madison's lack of affordable homes."

The cartoon depicts an archetypal be-turtlenecked old white hippie with a graying ponytail talking down to a homeless man in the rain, saying: "On the bright side, at least you don't have to live in an affordable apartment near the flight path of the F-35s." One could get into a whole thing about the bizarre racial inversions in Hands' cartoons, but suffice it to say that a lot of the folks at the forefront of anti-jet activism in Madison are in fact poor and working-class people of color. The sort of person he's drawing here seems a bit more like someone who owns a $400,000 house on the near-East Side and flips out about the occasional outdoor concert.

Framing the anti-jet crowd as callous housing obstructionists lets some key people off the hook. Namely those who have been cheering on the F-35s and downplaying the risk, without considering that it may be extremely impractical and economically short-sighted to base fighter jets in a rapidly growing urban area that badly needs to create more housing. Madison has boned itself on this. At whose expense? People who already have a hard enough time finding decent housing they can afford. At the expense of a North Side that will no doubt change, but deserves a chance to change on its own diverse, gloriously marshy terms.

Military and business leaders promise jobs and an economic boost for the Madison area. They have traded up for a very expensive wrench that will now be hurled into every decision-making process about development in the flight path for the foreseeable future. And however much people quibble about and minimize the noise F-35s will create compared to the F-16s already based at Truax, the impacts of this sort of thing are already here and already costing us.

Dane County officials are already pursuing litigation over PFAS pollution, a problem deeply intertwined with both civilian and military aviation. You already can't take a walk along Starkweather Creek without seeing warning signs about the contamination. More costs are likely to fall on local governments, as state and federal governments don't have anywhere near an adequate handle on this issue. The business lobby and the courts have limited state environmental regulators' ability to control PFAS thus far, which will make any kind of accountability an uphill battle. At the federal level, too, we are playing catch-up. There are significant obstacles to suing the military over PFAS contamination.

We in Wisconsin and Dane County aren't equipped to deal with the environmental damage that has already happened related to fighter jets, much less the pollution we risk going forward. The pro-jet folks would have us proceed without real plans or capabilities for handling the downside. We already struggle to maintain the health of our local watershed—the bodies of water that give the area so much of its appeal and are a mighty economic asset in their own right. And to these challenges we have added the legal and scientific unknowns of PFAS.

This is sold to us as the pragmatic, wise, sober, cool-headed road. They say none of this will get bad, we can mitigate the sound impacts, and anyways, look, the military says it's fine. Never mind that the F-35 has gone through a series of costly delays and design problems. It's a bad bet even to a lot of people who are otherwise fine with dumping trillions of dollars into the military. You don't even have to have a problem with the military-industrial complex to criticize the F-35 program—in this case, it really is not military-industrial complexing all that effectively.

When people balk at the "military-industrial complex" framing of the issue, it's because Americans often feel the need to convince themselves that their views are entirely pragmatic, above the fray of ideology and politically charged concepts. Invariably, self-styled pragmatists like Hands do have their own share of assumptions and frameworks—whether they care to examine those is another question. But the folks opposing F-35s tend to come to it from a deeply practical perspective. And a concept is useful when it is staring you in the face.