Like the rest of the world, Havana and Cuba have just completed the first full year of Covid 19.  It has done so with the full force of the U.S. embargo on its neck, including additional measures enacted by the Trump administration and so far not modified or removed by the Biden administration.  What has Havana been like the past year?  What is it like now? What have been the major challenges and achievements?

Register to attend (only one registration is needed for the series)

Please join us to explore these and other questions with 5 leading voices from Cuba.  All events start at 6 pm

April 13:  From the Perspective of an Economist – Estéban Morales

April 20:   From the Perspective of Science & Healthcare – Luis Montero Cabrera

April 27:  From the Perspective of a Sociologist and Feminist – Marta Nuñez

May 04:  From the Perspective of a Poet and Writer – Nancy Morejón

May 11:  From the Perspective of the Next Generation  —  David Faya

Each week will start with a short presentation, followed by plenty of time for questions and dialogue.  The discussion will be moderated by Cole Harrison (Massachusetts Peace Action), Sandra Levinson (Center for Cuban Studies), and Gloria Caballero (Latin American Solidarity Coalition of W. Mass)

Register to attend (only one registration is needed for the series). At the close of each session you will be given information and options for action to lift the Sanctions and end the Embargo, as well as ways in which you can get involved with the organizations sponsoring and co-sponsoring the series, or hold events and forums in your own community, institution or organization.

Two months into the Biden administration, the fate of the Iran deal remains perilously uncertain and the president has done little to reverse Trump's failed "maximum pressure" policy or ease crushing sanctions on 83 million people — in the middle of a pandemic.

If we want to see diplomacy succeed, then we need to make it clear to the new administration that the United States must save the Iran deal. That’s why, together, with the National Iranian American Council (NIAC), Friends Committee on National Legislation, Peace Action, and 19 other organizations, we’re launching a #ReSealTheDeal week of action.

We’ve got an ambitious goal of elevating 100,000 voices to call for a return to the Iran deal. You can join the call today by signing our petition urging Biden to restore and rejoin the Iran deal. 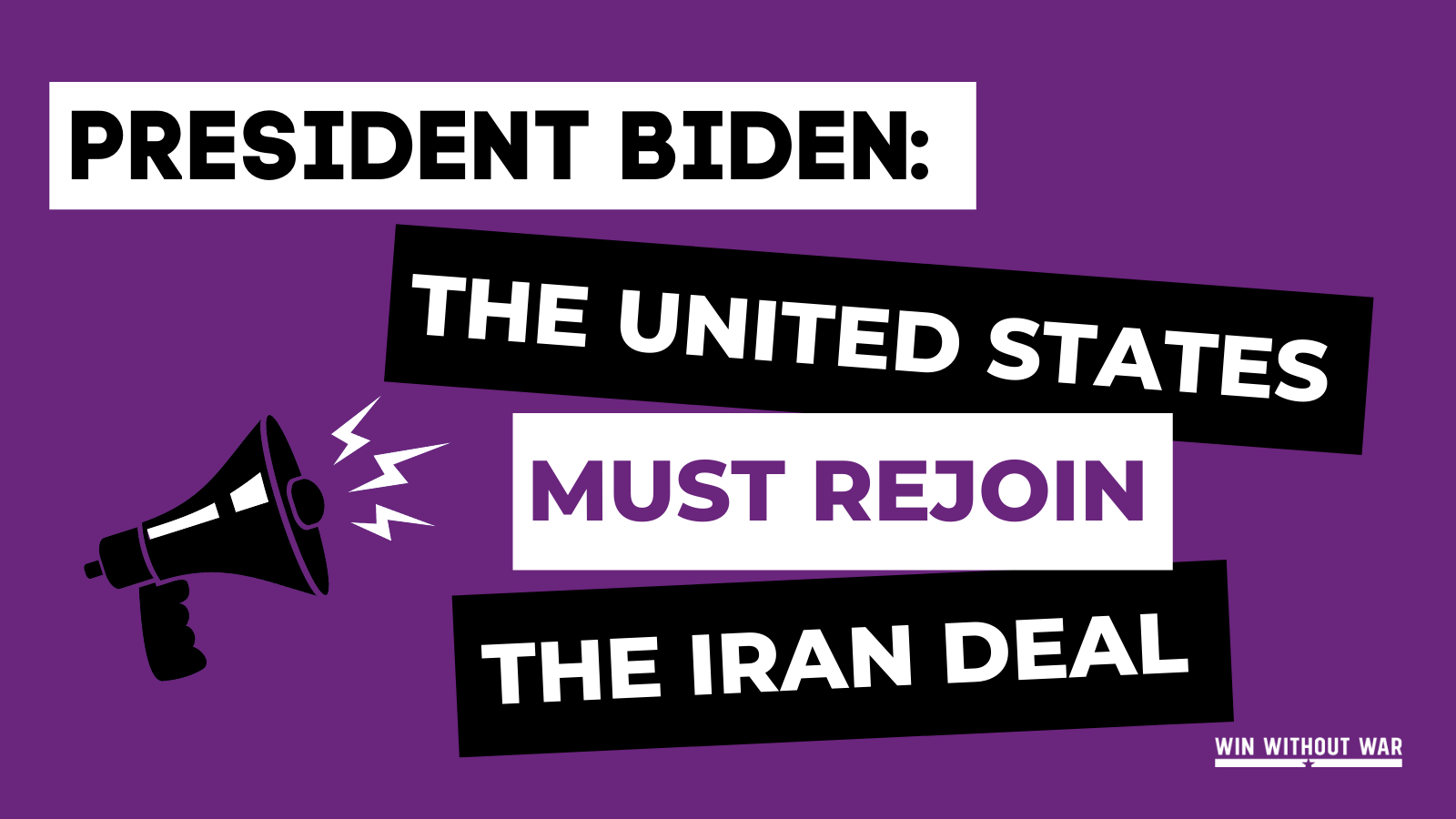 The Iran deal was the result of years of painstaking negotiations and is one of the strongest and most significant nuclear nonproliferation arrangements in history. With this deal, we peacefully eliminated the threat of a nuclear-armed Iran and strengthened our own national security. Without it, we face the very real prospect of another disastrous conflict in the Middle East.

Since Trump left the Iran deal in 2018, the U.S. and Iran have only narrowly avoided war. And if President Biden doesn’t change course, that is the path we’re heading down.

But changing decades of foreign policy failure won’t be easy. It’s going to take ALL of us taking action to demand a future free from endless war and filled with peace and justice.

The good news is, our movement CAN urge President Biden to choose the path of diplomacy — IF we build enough momentum and pressure.

And luckily, we’re not alone. This week, over 20 pro-peace, pro-Iran-deal organizations are pushing President Biden to honor his campaign promise and return the United States to the Iran nuclear deal immediately.

Together, we’ll unite the voices of 100,000 and urge Biden to #ReSealTheDeal. Can you add your name and join this chorus today?

Thank you for working for peace,

Stephen, Annika, Sara, and the Win Without War team

P.S. In case you missed it, NIAC is hosting an expert panel featuring Senator Chris Murphy and other key international relations and nonproliferation experts this Wednesday at 2:30 PM ET. You can RSVP here to join and find out more details for the event!

Public interest organizations sent a letter to the U.S. Department of Energy (DOE) requesting that it address calls for a rigorous environmental review of plans to expand production of nuclear bomb cores at the Los Alamos National Laboratory in New Mexico and the Savannah River Site in Aiken, South Carolina.

The non-profit groups­Nuclear Watch New Mexico, SRS Watch and Tri-Valley Communities Against a Radioactive Environment­have previously submitted a number of formal comments and information related to the environmental and public health risks associated with a significant expansion of plutonium “pit” production at the two DOE sites.

The three organizations’ documents, which include several legal filings since 2019, were consolidated and re-submitted on Wednesday so the DOE under the new Biden administration has “immediate access to these documents,” the letter states.
Download the documents

A key concern among the three public interest groups is the necessity of preparing a legally mandated Programmatic Environmental Impact Statement (PEIS) analyzing the potential impacts under the National Environmental Policy Act (NEPA) at all relevant DOE sites. The groups want to ensure that the administrative record is intact and that reconsideration of the PEIS be undertaken before legal action is pursued.

“We are hopeful that a review of programs with significant environmental impacts under NEPA will return to normalcy with the new presidential administration,” said Leslie Lenhardt, staff attorney for the South Carolina Environmental Law Project, a non-profit environmental law firm representing the organizations. “DOE and the National Nuclear Security Administration have a new opportunity to revisit their prior refusal to conduct a PEIS for this critical issue.”

In 2018, in an effort to expand and refurbish the nation’s nuclear weapons stockpile, the Trump administration proposed producing at least 80 pits a year­30 at the existing Los Alamos site and 50 at the Savannah River Site.

At Los Alamos, pit production has been plagued by a long history of safety issues, yet DOE is proposing to increase production by 50 percent at that location. At the Savannah River Site, which has never produced pits, the DOE is seeking to convert the never-finished Mixed Oxide (MOX) Fuel Fabrication Facility into a pit factory. The failed MOX facility wasted billions of taxpayer dollars and was not designed for producing nuclear war heads.

Pit production entails processing hazardous and radioactive materials and would significantly increase the amount of nuclear and toxic wastes generated at the Savannah River Site and Los Alamos. In addition to the possibility that plutonium could be stranded at the sites, drastically increasing the nation’s plutonium pit processing capability means more waste needs to be treated, stored or disposed of­a risk for surrounding communities who may be impacted by the release of these materials.

The groups say the DOE is required to analyze the collective environmental impacts at the multiple production sites as well as impacts on the waste isolation pilot plant in New Mexico, where the agency plans to dispose of plutonium pit wastes without adequate review. The groups strongly affirm that the public has the right to participate in the PEIS decision-making process pursuant to the National Environmental Policy Act.

“While we fully anticipate the Biden administration will affirm the need to prepare the PEIS on expansion of plutonium pit production, we remain ready to bring a lawsuit under NEPA,” said Tom Clements, director of SRS Watch.

Marylia Kelley, executive director of the Livermore-based Tri-Valley Cares noted that the “driver for expanded pit production is a novel warhead design underway at Livermore lab in California. Under NEPA, the agency must consider the DOE-complex wide impacts of this proposal in a thoroughgoing programmatic review.”

Jay Coghlan of Nuclear Watch New Mexico added, “It’s important to note that no future pit production is to maintain the safety and reliability of the existing nuclear weapons stockpile. Instead, it is for speculative new nuclear weapons designs that can’t be tested because of the international testing moratorium, or ​perhaps worse yet may prompt the U.S. back into testing, after which surely other nations would follow.”

Solidarity Statement on Racism by the Milwaukee End the Wars Coalition

A Candlelight Vigil for Peace and Global Nuclear Disarmament

Please join Peace Action of Wisconsin on Thursday, August 6th for a candlelight vigil along Lincoln Memorial Drive to commemorate the 75th anniversary of the atomic bombings of Hiroshima and Nagasaki, and renew our commitment to a world free from nuclear weapons.

75th Anniversary of the Bombing of Hiroshima & Nagasaki

(Free Parking in the lot across from Bradford Beach and the North Point lot just south of there.

Meet in either one of the two parking lots to pick up lanterns, signs and banners.)

Everyone please wear masks.  Special peace masks will be available for sale.

Co-sponsored and endorsed by a number of other local peace & justice organizations.